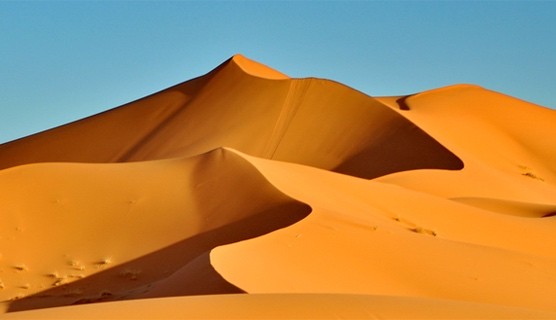 Merzouga is a small town out on the edge of the Sahara Desert of Erg Chebbi. Merzouga is only 20 km away from Algerian border where the paved road ends and the real Sahara Desert sand dunes begin. Merzouga desert is the most common destination in Morocco for Camel treks and desert camps. To experience the Sahara desert dunes it is a must to take a camel trip and stay overnight in a berber tent or in a luxury camp. The camel trip takes approximately 1 hour through amazing red-orange sand dunes at sunset to reach the sahara desert camp where you will be served wonderful and rich dinner, enjoy a musical play with the staff around blazing fire. But note it is at least a ten hours drive from the erg chebbi dunes to Marrakech. The trip is possible in 3 days however we recommend a slow pace over 4 or 5 days.

The drive will pick you up from your hotel or Riad in Marrakech start the road to Dades Valley through Tizi n Tichka  is mountain pass  in Morocco. Linking the south-East of Marrakesh to Ouarzazat city through the High Atlas mountains. It lies above the great Marrakesh plains, and is a gateway to the Sahara Desert. From November through March, snow can often fall on the pass, but it can be warm all year around in the strong sun. The road was constructed along the old caravan trail by the French military in 1936 and is now part of National Route 9.

Keeping in touch with traditional High Atlas Berber villages arriving Ouarzazate city. As quiet province with broad streets with altitude of 1160m would find it interesting to visit the Finite Oasis to the south of Ouarzazate which has the beautiful Pise-ksourIt also houses the Kasbah of Taourirt which was built in the 18th century and renovated in 1994.

You can also visit the Atlas film studios It is a huge studio covering about 30,000m large piece of desert. It is open to public on most of the days and you may even be able to catch a glimpse of filming of some movie. There have been movies like Lawrence of Arabia, Star Wars, and Gladiator that have been filmed here in part or their entirety. It is also a popular location for movies that require the desert scenes. Without forget the most amazing home named Ait-Ben-Haddou.

Ksar of Ait-Ben-Haddou.Located : is the most famous ksar in the Ounila Valley. The Ksar of  is a striking example of southern Moroccan architecture. The ksar is a mainly collective grouping of dwellings. Inside the defensive walls which are reinforced by angle towers and pierced with a baffle gate, houses crowd together , some modest, others resembling small urban castles with their high angle towers and upper sections decorated with motifs in clay brick , but there are also buildings and community areas. It is an extraordinary ensemble of buildings offering a complete panorama of pre-Saharan earthen construction techniques. The oldest constructions do not appear to be earlier than the 17th century, although their structure and technique were propagated from a very early period in the valleys of southern Morocco.

Continue the way to Dades gorges through Skoura and roses valley, discovering the beautiful  view  over  the  way.  You will spend the night in a traditional Berber Kasbah in Dades gorges. The famous twistiness are located between the BoumalneDades oasis and the village of Msemrir along the dry and desolate Atlas mountain range. There’s a restaurant at the summit, which is a good excuse to stop and take in the epic panoramic views of the valley and the Dades River. start the road to Merzouga. by crossing BomalneDades, reaching  tinghir.

In the morning after breakfast the beautiful view of  dades  gorges Tisdrin a Berber word meaning stairs is one of the most impressive mountain passes in the world. With sheer 500-foot drops and stunning views, no wonder everyone from tourists to major manufacturers have shot promotional videos along this insane stretch of road.

Visit Todra gorges as a series of limestone river in the eastern part of the High Atlas Mountains near the town of Tinghir .Todgha and neighbouring Dades River responsible for carving out these deep cliff-sided canyons, on their final 40 kilometres (25 mi) through the mountains. The height of the canyon walls can vary, but in some places can be up to 400 metres (1,312 ft) high. Continue the road to Merzouga, had lunch in the road, we’ll pass through Tinjdad, Jorf and Erfoud in which we’ll feel the beginning of the Sahara oasis of Tafilalet finally reaching typical city Merzouga.

Merzouga is a village in the Sahara Desert in Morocco, on the edge of Erg Chebbi, a 50km long and 5km wide set of sand dunes that reach up to 350m.The local population is mix of Arabs and Berber, and generally welcoming and friendly.

Merzouga is the most authentic place    you will ride the camels and go deep in the desert to spend a night in a nomad bivouac to enjoy a starry night under a clear and peaceful sky see the Magical sunset. Overnight and dinner in Berber tent under the starry sky.

In the early morning wake up to Have an opportunity to climb the sand dunes and see sunrise, makes all around shining as a gold   then riding Camels back to the hotel for a shower and breakfast.

The third day takes you through a different route heading towards of Marrakech  crossing many villages  Rissani, Alnif, and Tazarin ,and Agdez,wish is in Draa valley formed by a narrow ribbon of water from the High Atlas wish make it an amazing paradise of palme trees  passing  by  Ouarzazat city before cross the high atlas again and reach Marrakech where you driver drop you off in your hotel.

the price can start from 195€ per person. for groups and families to 390€ per person for couples .depending on the number of travelers, the season and accommodation you  choice.

Spanish
Message Us on WhatsApp